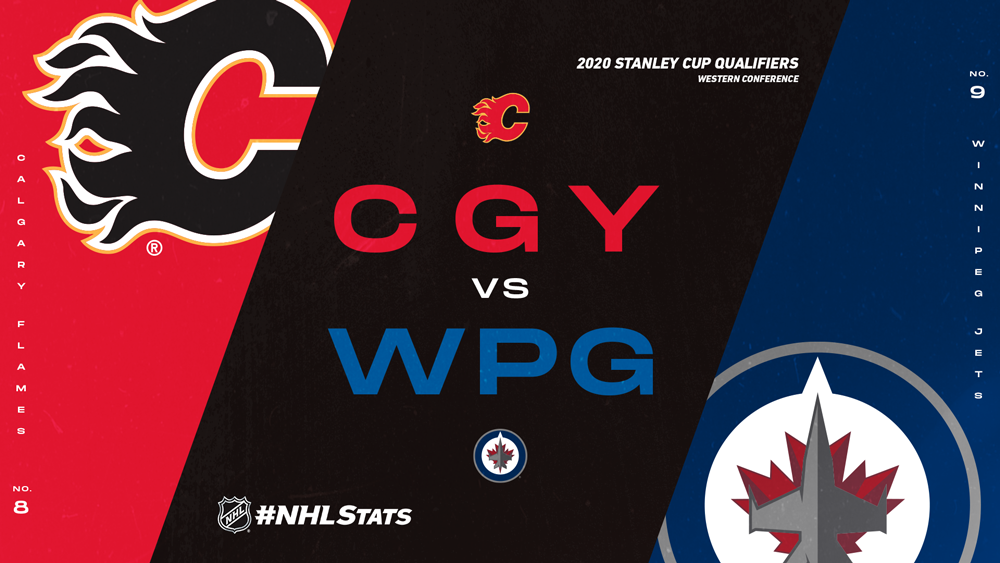 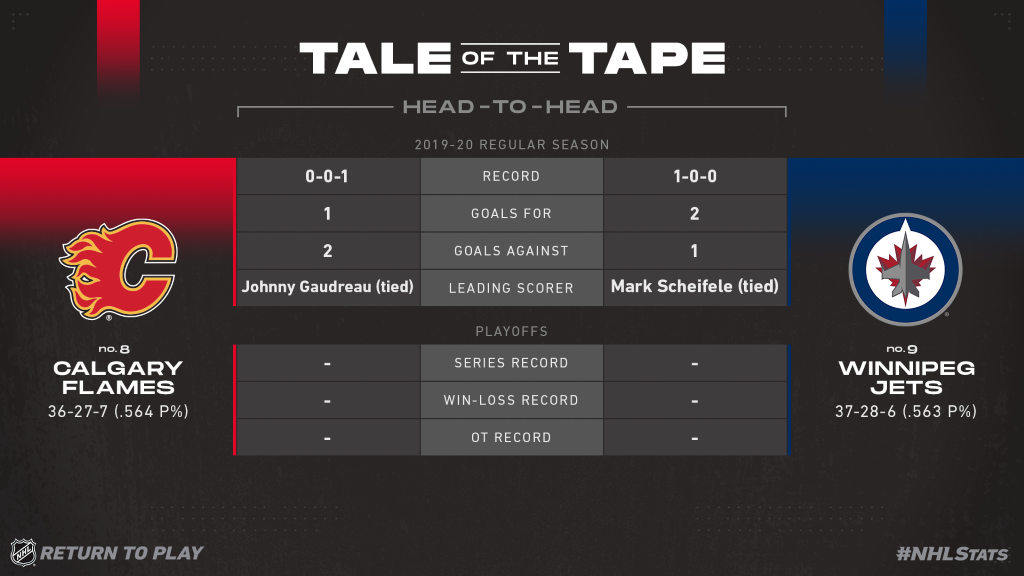 #NHLSTATS: CALGARY FLAMES
* Milan Lucic (2011 BOS) is the only Stanley Cup champion on the Flames’ roster. Overall, 20 of 24 resuming teams have at least one Cup winner, with the opposing Jets as one of four teams without. The Flames-Jets matchup is the only best-of-five series with fewer than two combined Cup wins.

* Calgary has won one playoff series since it reached Game 7 of the 2004 Stanley Cup Final, defeating Vancouver in the 2015 First Round. Six Flames recorded at least three points in their series-clinching Game 6 victory, including 1-2—3 from both Johnny Gaudreau and Sean Monahan.

* Only five current Flames played for the team during the 2015 postseason: Gaudreau, Monahan, TJ Brodie, Sam Bennett and Mikael Backlund. Captain Mark Giordano played in 61 games during the 2014-15 regular-season, but an injury sidelined him for each of Calgary’s 11 playoff games.

* The Flames matched an NHL record during their run to the 2004 Final by playing 26 games in one postseason. At the time, only the 1987 Flyers had played as many games in one playoff year.

* Matthew Tkachuk led the team in points this season (23-38—61 in 69 GP), highlighted by six contests with three-plus points. His 15 career games with three or more points ranks third among players from the 2016 NHL Draft class behind Auston Matthews (22) and Patrik Laine (17).

* Monahan (22-26—48 in 70 GP) was one of three 20-goal scorers with the Flames in 2019-20, behind team goals leader Elias Lindholm (29 G in 70 GP) and Tkachuk (23 G in 69 GP). It was the seventh consecutive 20-goal season for Monahan to begin his NHL career, setting a franchise record – besting the previous mark of six set by Kent Nilsson between Atlanta and Calgary.

* Monahan now is one of four players in franchise history to record seven consecutive 20-goal seasons at any point in his career, joining Jarome Iginla (13), Theo Fleury (10) and Joe Nieuwendyk (8).

* Monahan’s scoring prowess extends into the Stanley Cup Playoffs, with 8-5—13 through his first 20 postseason contests. Among players to debut with the Flames franchise, only Iginla and Willi Plett had more goals through their first 20 career playoff games. 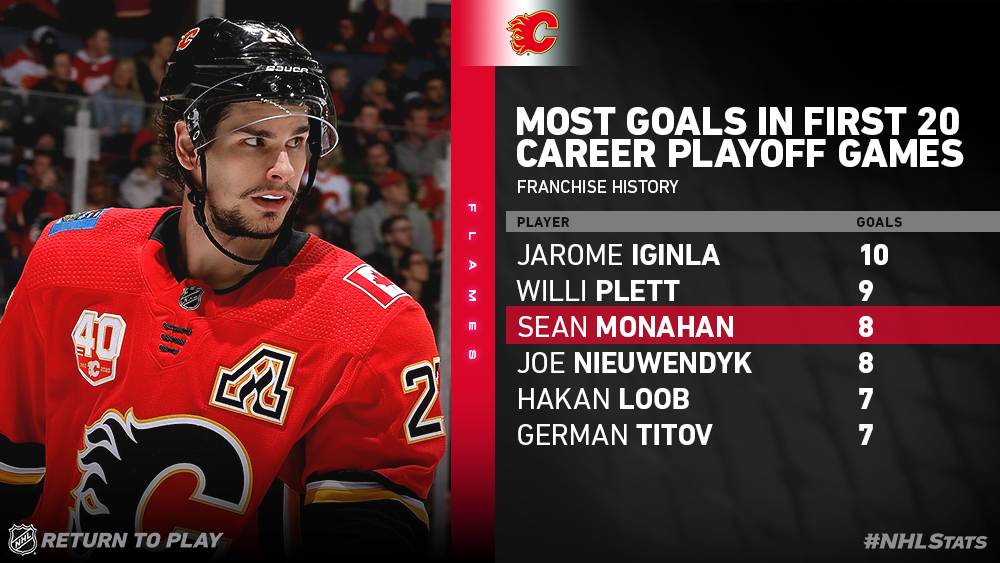 * The Flames have only one regulation loss in eight neutral-site games (3-1-4) in franchise history, a 4-3 defeat at the hands of the Canucks on Dec. 23, 1993 at SaskPlace in Saskatoon, Sask. SaskPlace also was the site of the club’s first ever neutral-site game on Oct. 13, 1992 against the Minnesota North Stars.

#NHLSTATS: WINNIPEG JETS
* The Jets’ deepest playoff run came in 2018 when they advanced to the Conference Finals, before falling to the Golden Knights in five games. That postseason included the only two playoff series wins in franchise history (4-1 W vs. MIN in R1 and 4-3 W vs. NSH in R2).

* Blake Wheeler (Plymouth, Minn.), who leads Jets skaters with 48 career playoff games, aims to become the first player born outside Canada to captain a Canadian team to a Stanley Cup.

* Wheeler is Winnipeg’s all-time leader in Stanley Cup Playoffs assists (22) and points (27), while Mark Scheifele owns the most postseason goals (16) in franchise history.

* Scheifele has scored 12 of his 16 career playoff goals as a visitor, all over the last three postseasons – tied for second in road goals behind Alex Ovechkin over that span.

* Scheifele scored seven goals at Nashville in the 2018 Second Round to establish a Stanley Cup Playoffs record for most road goals in a single series, eclipsing the previous mark of six achieved 10 times – most recently by Marian Gaborik with the Kings in the 2014 Second Round at Anaheim.

* Overall, Scheifele’s seven goals against Nashville were the highest single-series total by a player since 2010 and remain one of eight such performances since the 2000 Stanley Cup Playoffs. 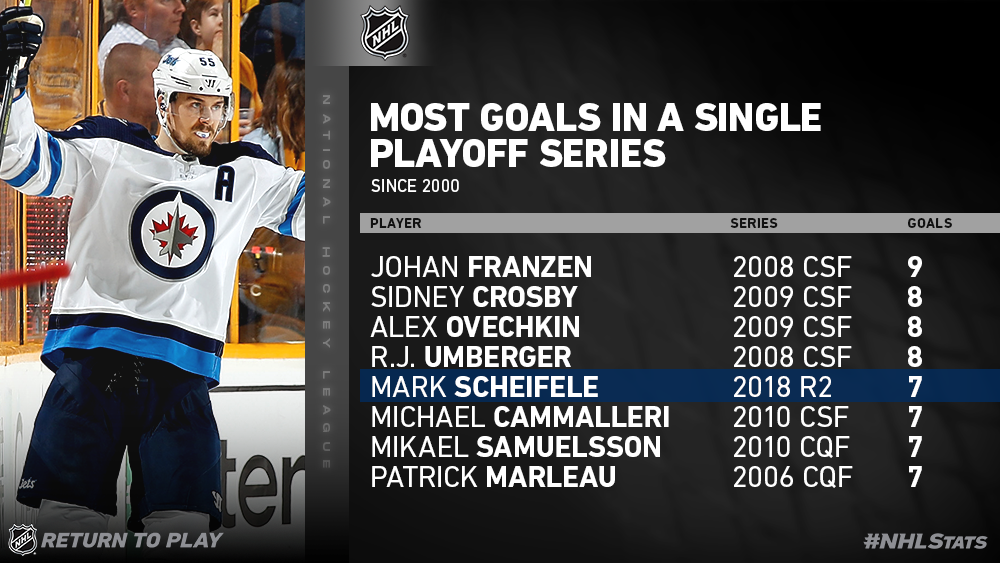 * Patrik Laine has 8-8—16 in 23 career playoff games, including goals in three straight games to begin the 2019 Stanley Cup Playoffs. Among players to appear in at least 10 postseason games for the franchise, Laine’s career goals-per-game of 0.35 in the playoffs trails only Scheifele (0.59).

NOTABLE CONNECTIONS
Some notable connections between the Flames and Jets: