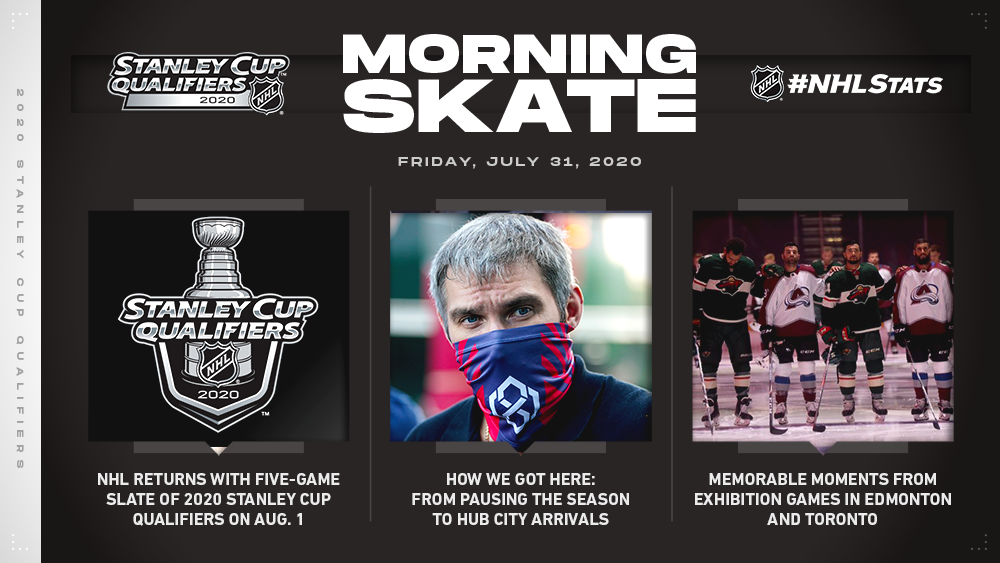 NHL RETURNS FROM PAUSE ON AUGUST 1ST
Following a 142-day pause, the National Hockey League will return on Aug. 1 with a full-day, five-game slate to open the 2020 Stanley Cup Qualifiers – a 10-day stretch packed with games that will whittle the field from 24 teams to 16. The resumption of play follows an agreement between the NHL and NHLPA that included a ratified four-year extension to the Collective Bargaining Agreement (through 2025-26). 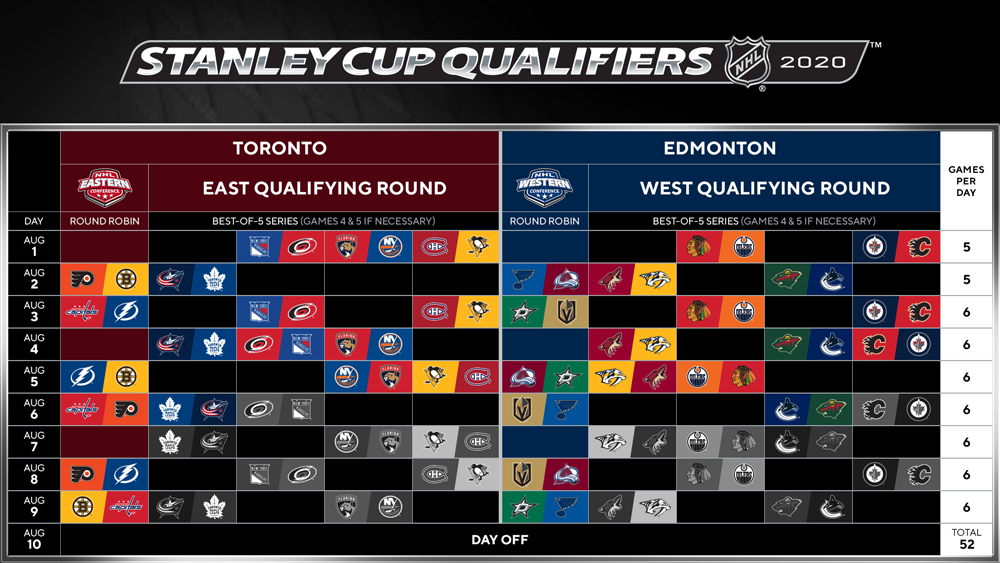 * The full North American broadcast schedule for the 2020 Stanley Cup Qualifiers (Qualifying Round and Round Robin) across NBC Sports, Sportsnet, TVA Sports, NHL Network, NHL.tv and NHL Center Ice is available in its entirety here. In the U.S., many games will be available in the local market on the team partner regional sports network. 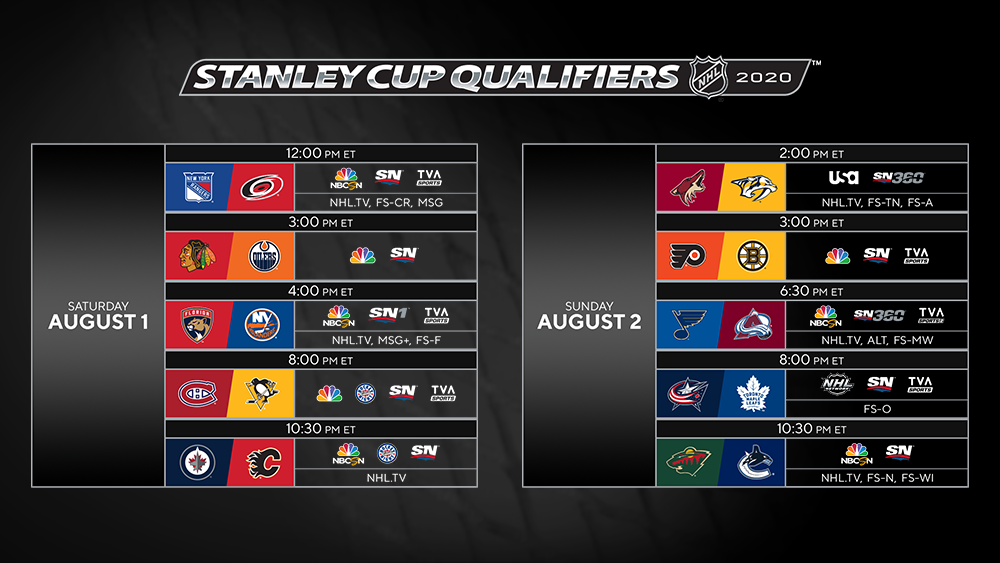 MEDIA REMINDER: Schedules and recordings of all Zoom media availabilities (including post-game) are available daily on the NHL’s media site – you must have an account to access this content.

* The 2020 Stanley Cup Qualifiers Information Guide as well as team playoff media guides also are available on the site.

HOW WE GOT HERE
March 11: Final Day of 2019-20 Regular Season
Although nobody knew it at the time, the NHL’s five-game slate on Wednesday, March 11 would eventually be deemed the final day of the 2019-20 regular season. The final game of the campaign saw the Kings end the season on a seven-game win streak after earning a 3-2 victory over the Senators at STAPLES Center. 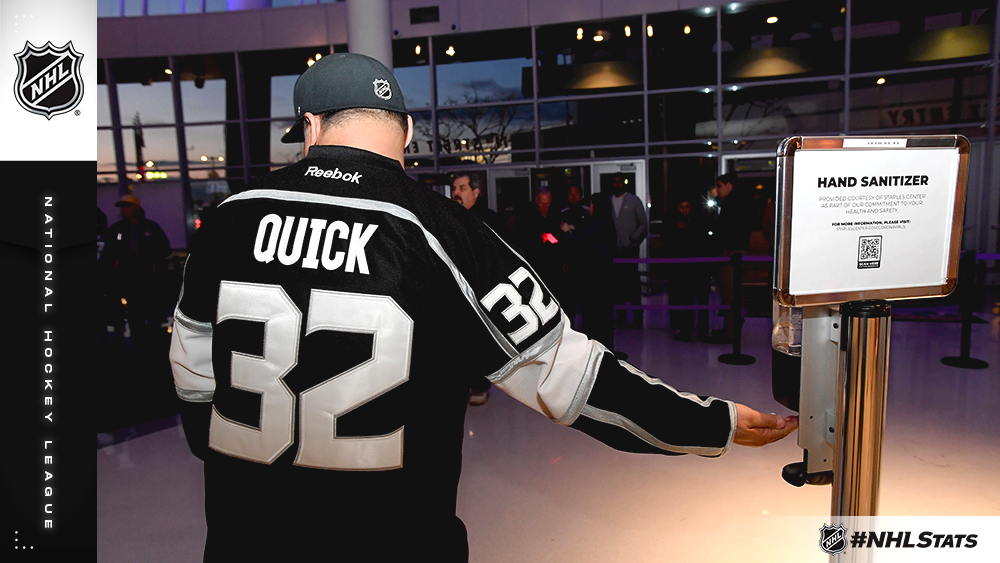 March 12: NHL Pauses Season
A statement by NHL Commissioner Gary Bettman read, in part: “In light of ongoing developments resulting from the coronavirus, and after consulting with medical experts and convening a conference call of the Board of Governors, the National Hockey League is announcing today that it will pause the 2019‑20 season beginning with tonight’s games.”

March 16: Players Can Return Home
Players could opt to return home (outside the Club’s home city) including outside of North America; the self-quarantine period would continue upon arrival in accordance with local mandates.

May 26: NHL Announces In-Depth Return to Play Plan for 2019-20
The NHL announced a Return To Play Plan for the 2019-20 season that would provide the framework for the 2020 Stanley Cup Qualifiers – highlighted by a modified competitive format in which 24 teams (top 12 in each conference by points percentage) will return to play and vie for the Stanley Cup at two “hub” cities. 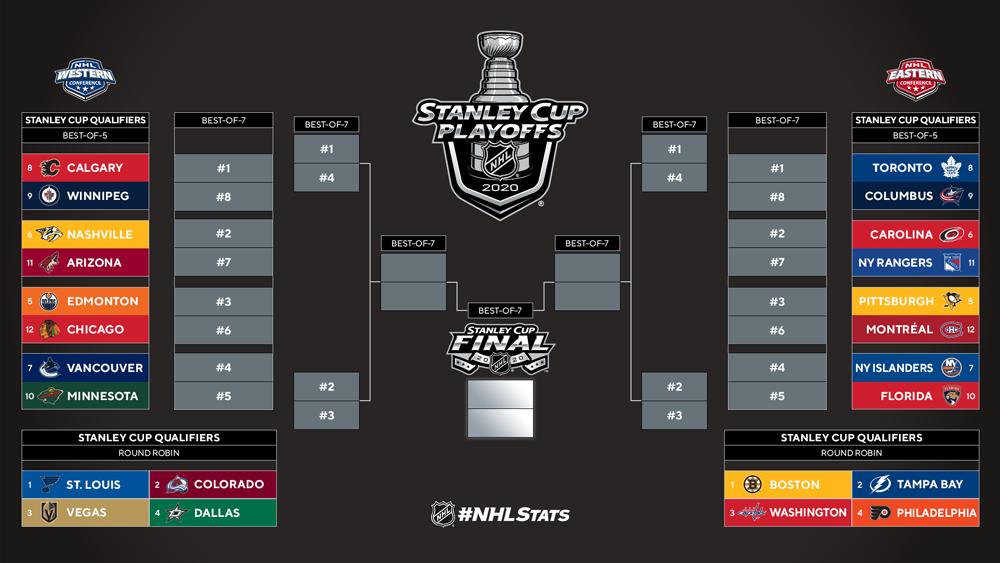 July 10: NHL and NHLPA Ratify Four-Year CBA Extension and Return to Play Plan
The NHL and NHLPA ratified a four-year extension to the CBA and a Return to Play Plan. Hub Cities also were officially announced – with Edmonton and Toronto to host the Western Conference and Eastern Conference, respectively, through the 2020 Stanley Cup Qualifiers, First Round and Second Round. The Conference Finals and Stanley Cup Final will also take place in Edmonton. 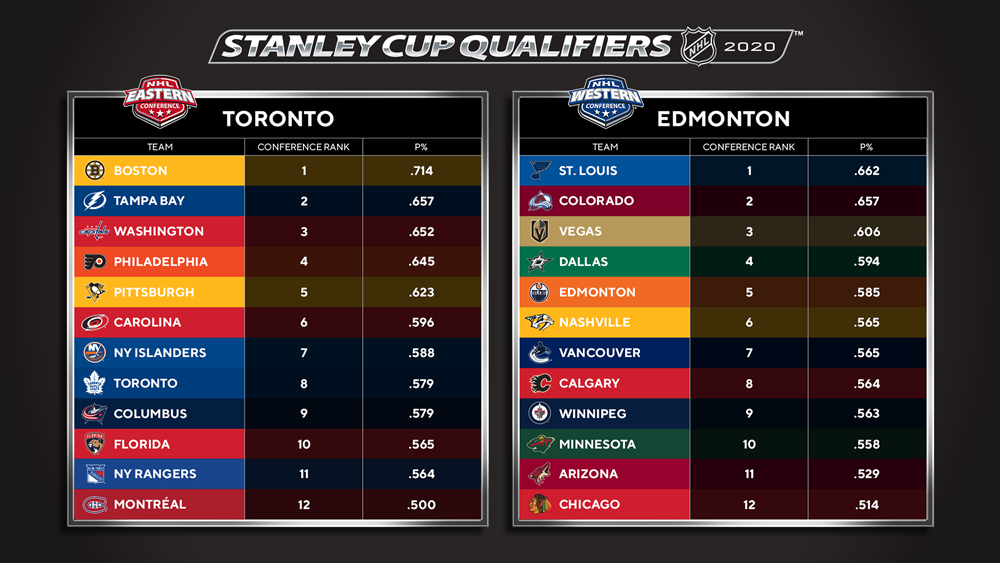 July 13: Formal Training Camps Open
All 24 returning teams could officially step back onto the ice in preparation for the 2020 Stanley Cup Qualifiers. 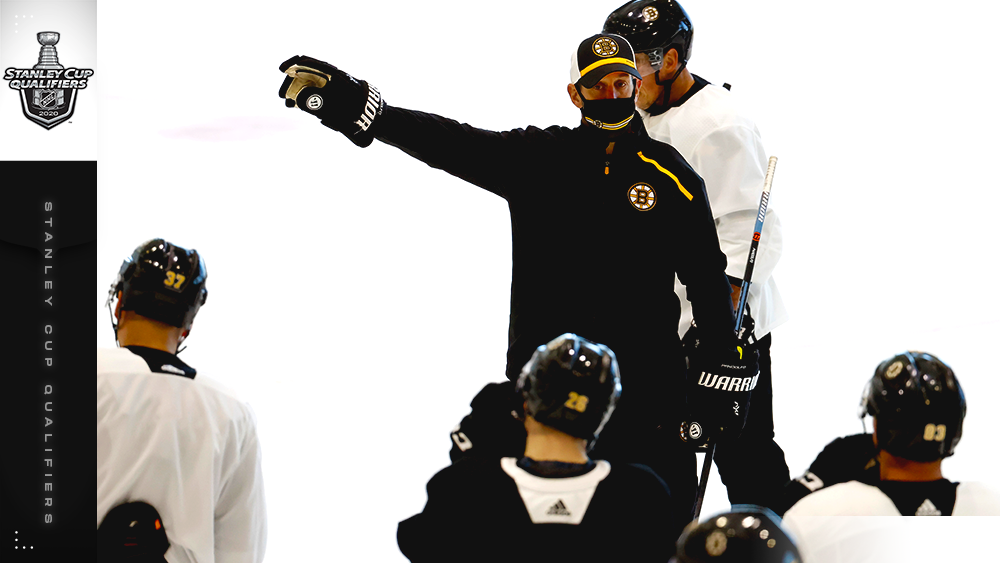 July 26: Clubs Arrive in Hub Cities
The Canadiens were the first team to enter the Secure Zone at 10:49 a.m. ET on July 26 and the scene repeated itself throughout the day with all 24 teams arriving in their respective Hub City for the 2020 Stanley Cup Qualifiers to begin Phase 4 of Return to Play. 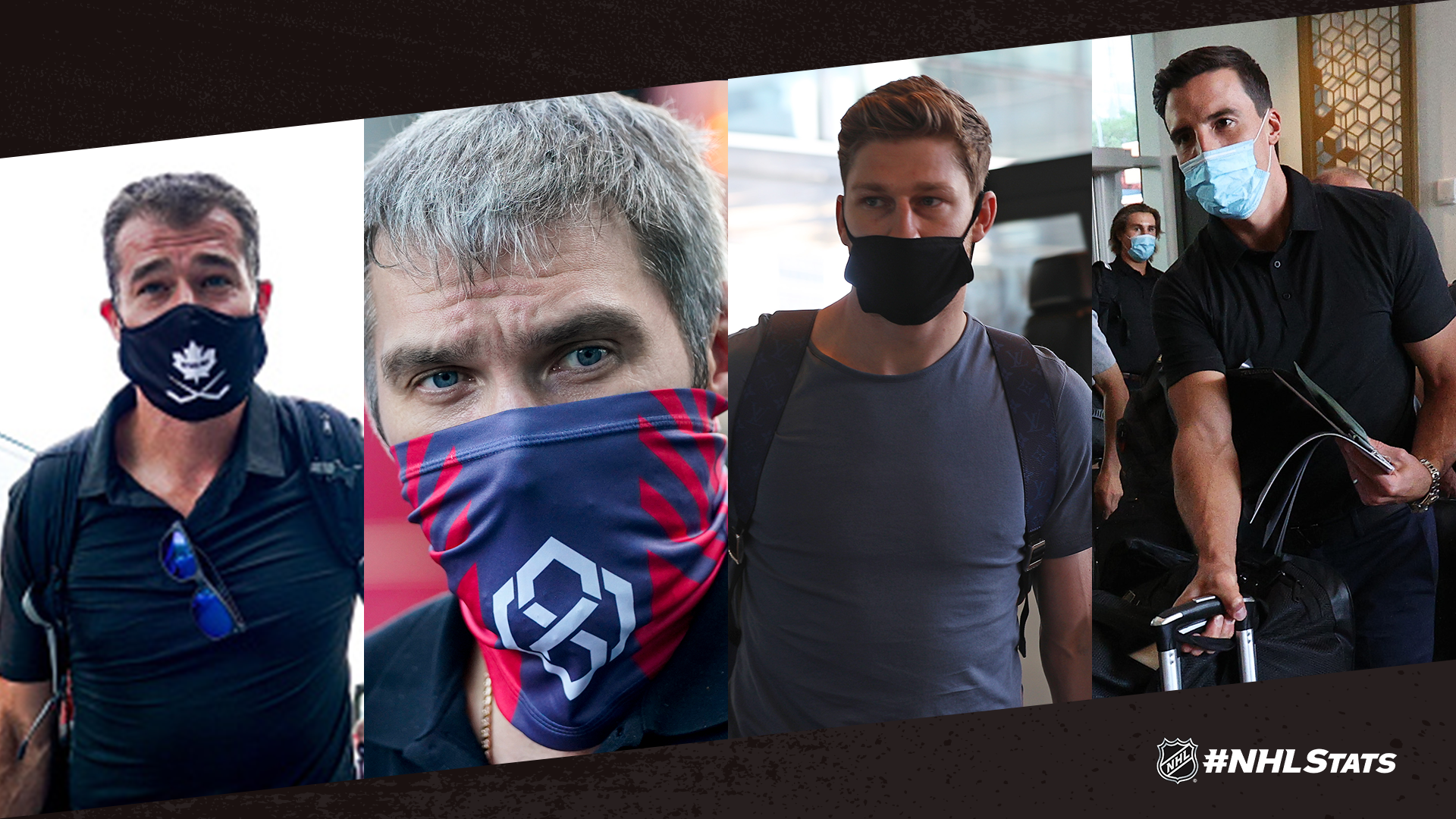 * Some players walked into their hub city rooms for the first time to find framed pictures of their loved ones back home. Nashville teammates Ryan Johansen and Matt Duchene were just a few to share the surprise on social media. 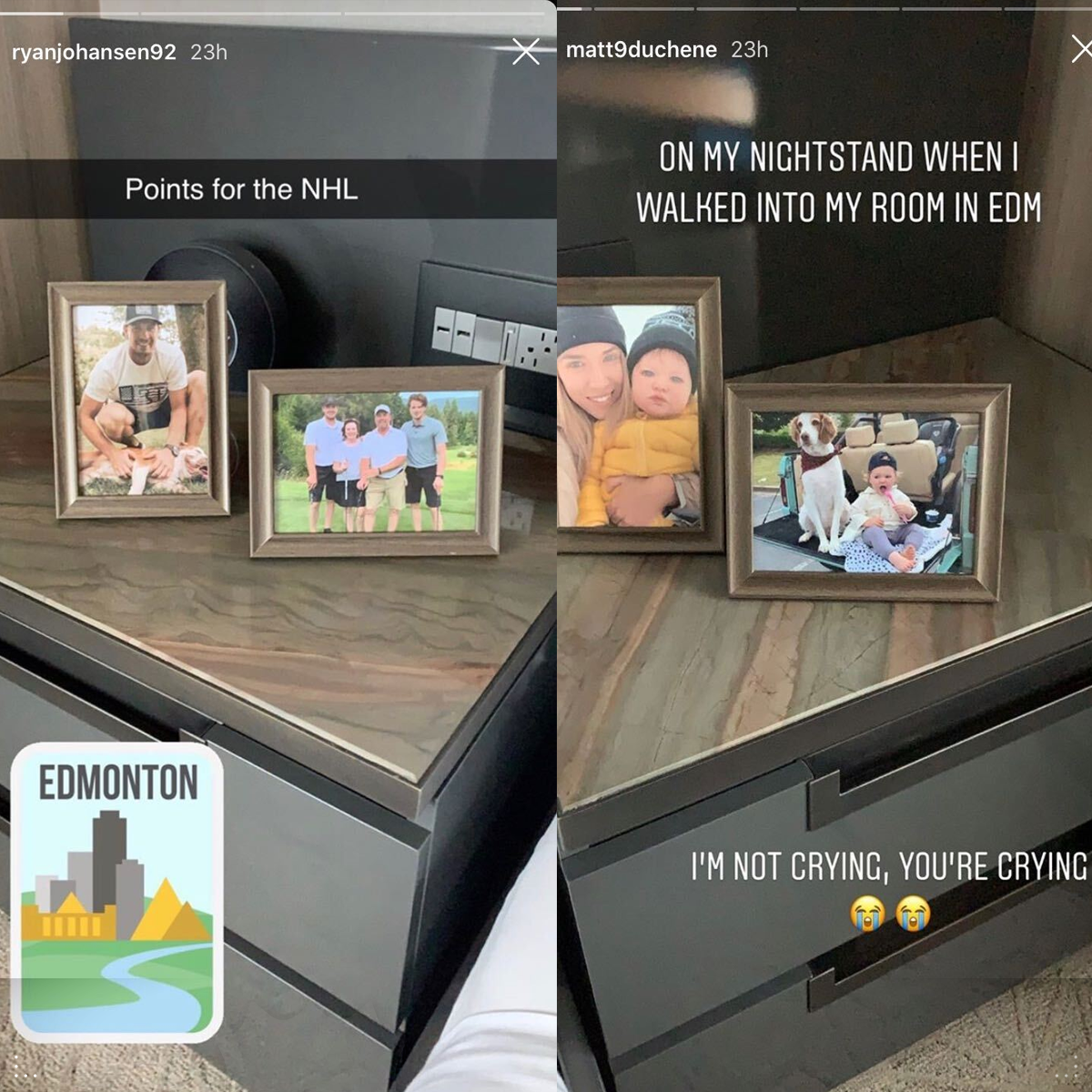 July 28-30: Exhibition Games
All 24 teams participated in one exhibition game across a three-day span with rivalries as the theme:

* Starting with the Flyers and Penguins in the opening exhibition game, returning teams put their rivalries aside to stand unified on the blueline in a stance against social injustice and racism. 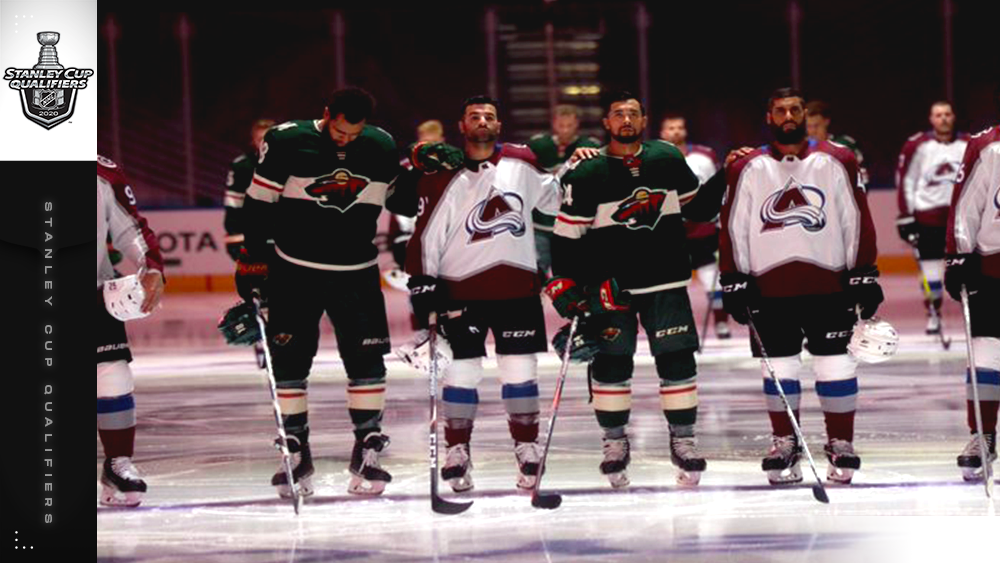 * The Oilers paid tribute to former forward Colby Cave, who passed away on April 11 at the age of 25, prior to the first exhibition game in Edmonton. In Toronto, they remembered four-time Stanley Cup champion and perennial fan favorite Eddie Shack. 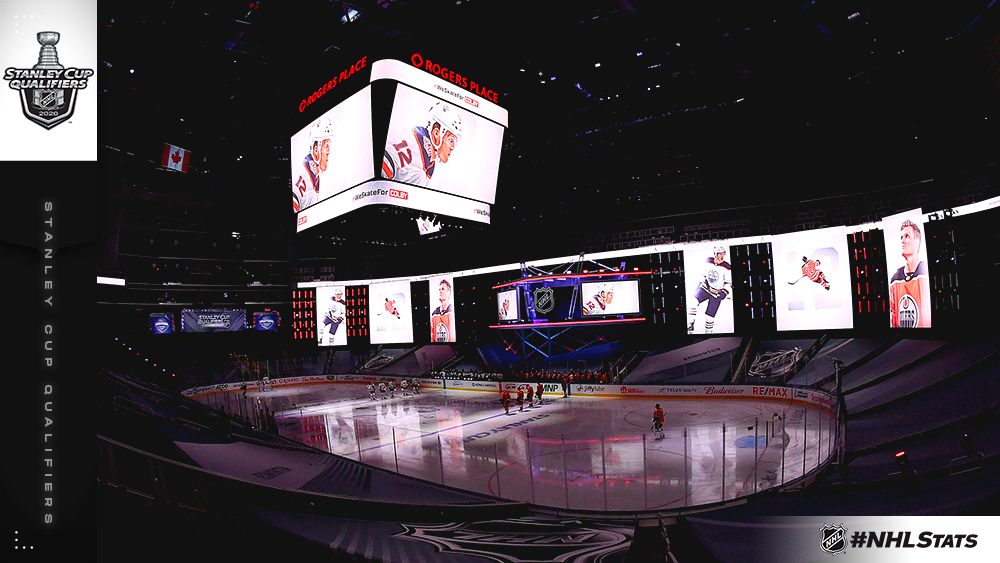 * In a quirky twist not likely to be repeated, the Canadiens were the home team against the Maple Leafs – in Toronto – affording Montreal the use of the Maple Leafs home dressing room at Scotiabank Arena and bumping the locals to the visiting locker room.

* An entire series has taken place in one venue 15 times in NHL history – most recently during the 1977 Preliminary Round between the Islanders and Blackhawks.

* The only time one city/arena has hosted multiple NHL games on the same day was March 3, 1968, when Madison Square Garden in New York City was the site for two regular-season games. The first was between the Flyers and Seals (1:30 p.m. ET) after a storm damaged the roof of the Philadelphia Spectrum, followed by the hometown Rangers hosting the Blackhawks (7 p.m. ET).

* The last time a best-of-five series was contested in the NHL was in 1986, more than 34 years ago. The last games in such a series were contested on April 15, 1986, when a pair of Game 5 upsets took place: the Rangers defeated the Flyers after finishing 32 points behind them in the regular season and the Blues ousted the North Stars on the strength of a five-assist showing by Doug Gilmour.